Axon Guidance in the Retinotectal and in the Olfactory System

In this project, we analyze the development of the retinotectal projection through computational simulation in MATLAB and experimental validation. We have devised a theoretical model which implements all potentially relevant guidance cue interactions involved in this developmental process. The model is used to predict the outcomes of in-vitro assays of axonal guidance, which are subsequently experimentally realized. To this end, novel assay substrates of guidance molecules are fabricated using protein printing, microfluidics or photo-labile protein caging. 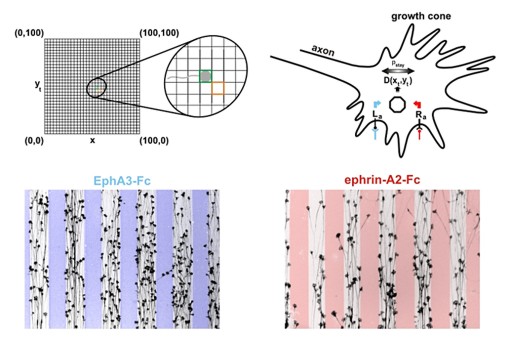 During topographic mapping, growth cones (the developing axon's steering device) perform precision navigation within fields of external ephrin-A concentration gradients. Intriguingly, there is evidence that the same growth cones are able to desensitize to this repulsive guidance factor, an observation that is hard to reconcile with topographic accuracy. We use micro-contact printing and collapse assays to address the puzzle of growth cone adaptation and resensitization in response to ephrin-A5. Using the so called "gap assay", we found that axons growing on homogeneous ephrin-A5 patterns become in fact desensitized, but regain sensitivity after encountering an ephrin-A5-free stretch of way. To gather insights on the intracellular mechanisms which are involved in this process, pharmacological inhibitors will be tested. In a second project, a method for genetic manipulation of chick embryonic retinal explants by electroporation is established and optimized. With this method we strive to introduce genetic sensors monitoring the dynamics of the molecular apparatus of axon guidance and to interfere with its expression. Effects will be analyzed by in vitro experiments using defined patterns of guidance cues.

Project 3: Organization and Development of the Olfactory Projection in Fish and Mouse

In the primary olfactory projection, in contrast to the retinotectal system, the spatial position of the parental neuron doesn't matter for the destination of its axon. Instead, axon targeting is determined by the specificity of the olfactory sensory neuron (OSN). Every sensory neuron expresses only one out of about 100 or 1000 olfactory receptor genes in zebrafish and mouse, respectively. OSNs of the same receptor phenotype are broadly scattered across the olfactory epithelium but all converge their axon to the same stereotypic point on the olfactory bulb. In the zebrafish, we investigate how, despite of a global randomness, subtle differences in the spatial distributions of OSN types contribute to axon sorting. In the mouse, we have embarked on a de novo search for genes involved in OSN axon targeting by differential screening of single-cell cDNA libraries of outgrowing OSNs of defined specificity. Collaboration partners: Dr. Jörg Strotmann (University of Hohenheim) and Dr. Natja Haag (former collaborator) 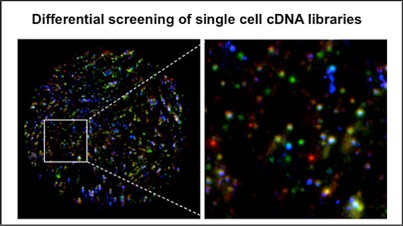