Cell Adhesion and Migration on 2D- and 3D Micro-Patterned Substrates

During recent years it has become clear that cells are not only influenced by biochemical cues but also by physical aspects like stiffness and geometry of the extracellular environment. These additional factors are simultaneously sensed on different length scales, ranging from nanoscale assembly processes at single sites of adhesion to microscale organization of the cytoskeleton. They have a major impact on cell fate and function, with dramatic consequences for tissue function. Most of our current knowledge on cell behavior and differentiation is derived primarily from studies on rigid and planar two-dimensional (2D) tissue culture substrates that are homogeneously coated with biomolecules. There is an increasing demand for in vitro models that capture more of the relevant complexity present in three-dimensional (3D) tissue scaffolds. In our projects we use various techniques to functionalize surfaces with biomolecules in a controlled density and a defined geometry. In addition, we have developed new methods to manufacture complex tailored 3D microstructures as a growth substrate for various cell types to study the influence of physical aspects on cell behaviour in a manageable 3D environment. 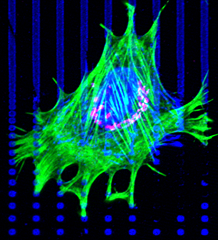 Directional cell migration in response to external stimuli is a fundamental process during animal development, wound healing, and tumor metastasis. Although much is known about chemotaxis -induced by gradients of chemical cues - the molecular mechanisms involved in haptotaxis (migration induced by adhesive protein gradients) are largely unknown. We use micropatterning to produce discontinuous fibronectin gradients and found that chicken embryonic fibroblasts (CEFs) read this information such that 80% of the cells migrated uphill towards a higher fibronectin concentration (Fig. 1). Reaching a plateau region, the cells stop migrating towards the highest protein concentration and start migrating randomly (Fig. 2). Using pharmacological inhibitors, we demonstrate that actomyosin contractility is a prerequisite for gradient recognition. Interference with microtubule dynamics results in cells that still recognize the gradient axis but can no longer discriminate between uphill and downhill directions. Beside the mechanism of the haptotactic migration we are also interested in the dynamics of the cytoskeleton during haptotaxis. With the help of immunohistochemistry and live cell imaging we are able to get a deeper insight in the microtubule network and dynamics e.g. by using different microtubule plus tip proteins like EB3.

Our system offers unique possibilities to answer important biological questions: How do cells recognize and read out adhesive gradients? What is the temporal sequence of intracellular organelle reorientation and remodelling of the cytoskeleton during polarization and haptotaxis? What are the intracellular signalling mechanisms involved in this process? How are the cytoskeletal components organized during haptotaxis? 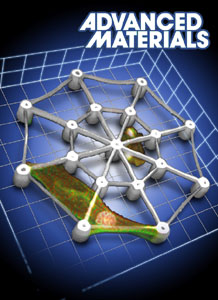 Our current knowledge on cell behavior and differentiation is primarily derived from studies on rigid and planar two-dimensional (2D) tissue culture substrates. Cell behavior and differentiation are, however, not only influenced by biochemical cues but also by physical properties like adhesive geometry, topography, and stiffness of the three-dimensional (3D) extracellular environment. Therefore, in vitro model systems that capture more of the complexity present in 3D tissue scaffolds are highly desirable. We realize (in cooperation with the group of Prof. Dr. Martin Wegener) 3D scaffolds by means of direct laser writing into biocompatible photoresists (Nanoscribe system). To incorporate in vivo elasticity we also focus on the fabrication of flexible 3D structures using Ormocer® as photoresist. These elastic 3D scaffolds can be rhythmically deformed by single beating cardiomyocytes. Calibration with an atomic force microscope in cooperation with the CFN Research Group Dr. Clemens Franz indicates that cellular forces down to 10-20 nN are detectable with this setup [Klein et al., 2010]. In collaboration with the group of Prof. Dr. Ulrich Schwarz we develop theoretical modelling approaches and computer simulations to understand the underlying biophysical mechanisms of cell shape in 3D scaffolds.

Project 3: Mechanical properties of cells and cell nuclei during invasion in 3D microstructure

Cell migration plays an important role not only during development, wound healing and immune response, but also in pathological processes such as tumor metastasis. In this project which is funded by the KIT (FYS), we systematically investigate different cell types invading 3D scaffolds with different lattice constants, substrate stiffness and biochemical surface covering. Since nuclear size and nuclear deformability could be limiting cell invasion factors, we modulate the mechanical properties of the nucleus by siRNA-mediated Lamin-knockdown.

Three-dimensional lattice structures
(A) Scheme of a simple 3D lattice structure. (B) Oblique view of a 3D-reconstructed confocal image stack after cultivation of BRLs in inelastic protein-coated scaffolds. (C) Growth of BRL-cells in flexible Ormocere®-baskets.